WHY SHOULD OXFORD GROW?

Report of Oxford Futures event at the Smith School for Enterprise and the Environment, 20 June 2013

The second event under the title Oxford Futures brought together over 30 members of the Society and others with an interest in the city’s development to discuss different aspects of growth. The ambitious plans for Science Vale, the upgrading of Oxford’s rail connections and its housing situation raise issues about the value of further growth and how the benefits can be secured without losing what is valuable.

This seminar was introduced by Dr Mick Blowfield on behalf of the Smith School for Enterprise and the Environment, which provides the university with an international hub and  bridge between disciplines. The Director, Professor Gordon Clark invited two experts from very different fields to introduce the drivers of urban change, and the relationships between transport and development.

Professor Michael Keith, who directs Oxford’s Centre for Migration, Society and Policy (COMPAS) had learned the importance of distinguishing between what you can and cannot change when he was Leader of Tower Hamlets Council in East London. He highlighted six factors which affect the future of cities like Oxford: an ageing population and lifestyle changes which are changing residential preferences; a growing low-income social care sector needing homes close to workplaces; cultural draws which boost economic success; the importance of transparency in maintaining community support; and the value of social interaction, which technology cannot replace.

Dr Tim Schwanen has joined the Transport Studies Unit from the Netherlands, where his research had focussed on behaviour. Economic and transport growth are closely interlinked, and transport is a major cause of carbon emissions. Though it is tempting to look to models such as Montpellier and Freiburg, innovations can be hard to replicate. Changing behaviour depends on complimenting investment with other policies, for example parking. Oxford’s park and ride system is one of the best, but the city needs to be seen as a node in a regional system. Congestion is inevitable, but more could be done to make walking and cycling easier. Grand projects can take funds away from the existing system, and primarily benefit those who are already well off.

Workshop discussions on the topics of the economy, transport, housing, the environment, and the overall picture were convened by Nicholas Falk, John Glasson, Peter Headicar, Martin Stott and Peter Thompson, and a full report is being published on the Society’s web site. Among the conclusions were:

In conclusion the Chairman thanked everyone.  Ten years ago the Society published ‘Visions for Oxford in the 21st Century’, comprising 40 essays on the future of Oxford.  Even then, Oxford was described as a place of ‘private affluence and public poverty’. Change is inevitable, but we need better ways of engaging all the communities in the process if we are to make the most of the benefits. 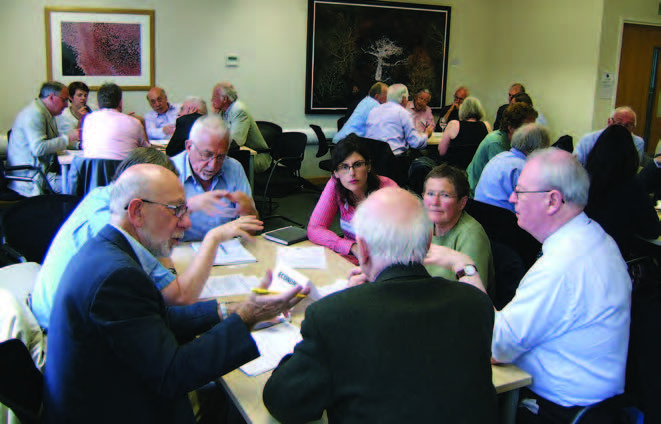